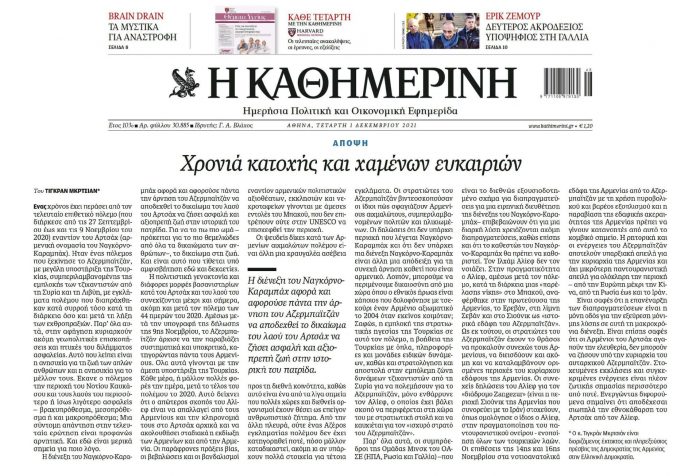 Below we present the op-ed by H.E. Tigran Mkrtchyan, Ambassador Extraordinary and Plenipotentiary of the Republic of Armenia to Hellenic Republic, published in “Kathimerini”, one of the largest print and online newspapers in Greece. 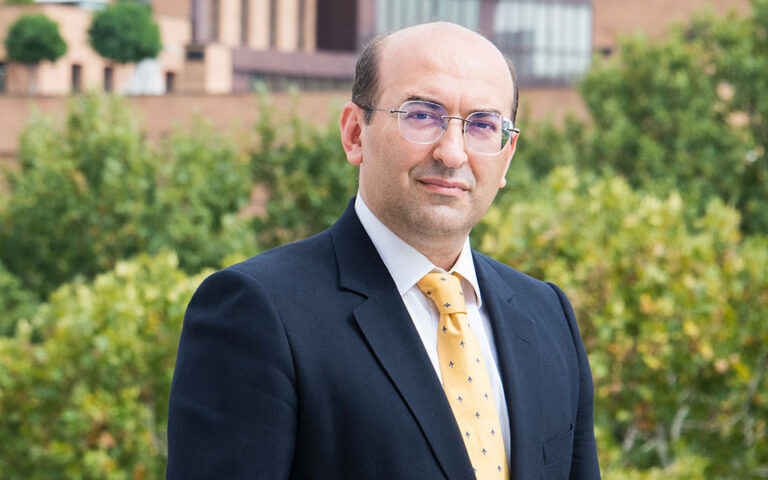 One year has passed since the last war of aggression against Artsakh (the Armenian appellation of Nagorno-Karabakh) in 2020 September 27 – November 9. This was a war launched by Azerbaijan, heavily supported by Turkey, including with the involvement of Jihadists from Syria and Libya, with massive cases of war crimes committed during and after the hostilities. Nevertheless, the narrative is still dominated by geopolitical overviews and security dilemma aspects. What is lacking is concern about the lives of peoples on the ground and their future. Has the war made the region of the South Caucasus and its peoples more or maybe less secure in the short, medium or even long term? A short answer to the last question is evidently negative. And here are a few points why.
The Nagorno-Karabakh conflict is and has always been about the refusal by Azerbaijan to accept the right of the people of Artsakh to live safe and dignified life in their historical homeland. To put it more bluntly – it is about the most fundamental of all rights of people- the right to life. And this is what has been put under question for decades.
As early as in 1960s the Armenians of Artsakh appealed to the Soviet government to revert Stalin’s illegal decision of 1921 to include the area into Azerbaijan, a new state created in 1918 by the direct support of the Caucasian Islamic Army led by Pan-Turanist Turkish general Nuri Pasha. In 1988 the people of Artsakh again appealed to Moscow with a request to implement their right to self-determination. Why? The authorities in Azerbaijan systematically and for decades had continued a policy of ethnic cleansings and cultural genocide aganist the ethnic Armenians of Artsakh. Various forms of suppression and discrimination of Armenians in Soviet Azerbaijan were the reason why in 1965, 1967, 1977 and 1988 tens of thousands of signatures were collected under petitions and letters calling for a just solution to this issue, which would be the passing of Artsakh under the control of Soviet Armenia. It was also the desire to free themselves from oppression which led the Armenians of Artsakh to defend their lives in their homeland during the wars in 1991-94, 2016 and 2020. 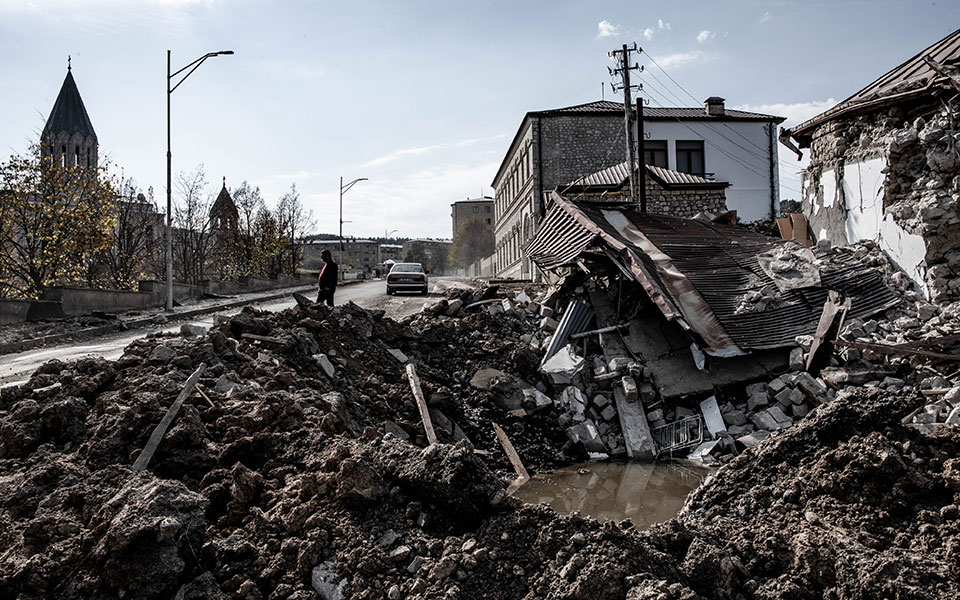 Cultural genocide and various forms of harassment against Artsakh and its people continues to this very day, even after the 44-day war of 2020. Immediately after the signature of November 9th statement Azerbaijan started violating it systematically and hypocritically, always blaming the Armenians. All this is conducted with the direct support of Turkey. Every single day, or rather several times per day, following the end of the war in 2020, shows that Aliyev’s ultimate purpose is to get rid of Armenians and their heritage in Artsakh to be followed by gradual pushing out of Armenians from Armenia as well. The lunatic acts of violence, desecrations and vandalism against Armenian cultural sites, churches and cemeteries are conducted by the direct orders of the Baku, that does not allow even the UNESCO visit the area. The unveiling of a hideous “Victory Park” in Baku encouraging children to visit it and ridicule Armenians has already been characterized as a “Nazi park”. Common is also racist language which clearly aims at dehumanizing Armenians: e.g. “wild tribe”, “barbarians”, “dogs”, “savage enemy”, “virus more dangerous than coronavirus”, etc. calls to one’s mind the world’s worst historical criminals.
Mock trials against Armenian prisoners of war is yet another blatant disregard towards the international community as this is one of the few points that several countries and international organizations have raised as a matter of urgent humanitarian issue. On the other hand, not a single Azeri war criminal has ever been indicted, let alone convicted even if there is plenty of evidence of such crimes (Azerbaijan’s soldiers were themselves video-taping how they were butchering Armenian captives, including civilians and elderly people). The statements that there is no region called Nagorno-Karabakh and that there is no more Nagorno-Karabakh conflict are another proof about the continuous denial of everything Armenian. Well, can we expect such justice in a country where the national hero is someone who axe-murdered a sleeping Armenian officer back in 2004? Clearly, Turkey’s military leadership’s involvement in this war, Turkey’s assistance with weapons, intelligence and special units, as well as its recruitment and sending to the war zone of Jihadist forces from Syria to fight for Azerbaijan, has only encouraged Aliyev, who has made a point of going around his country in military uniform and boasting of the “mighty Army of Azerbaijan”. 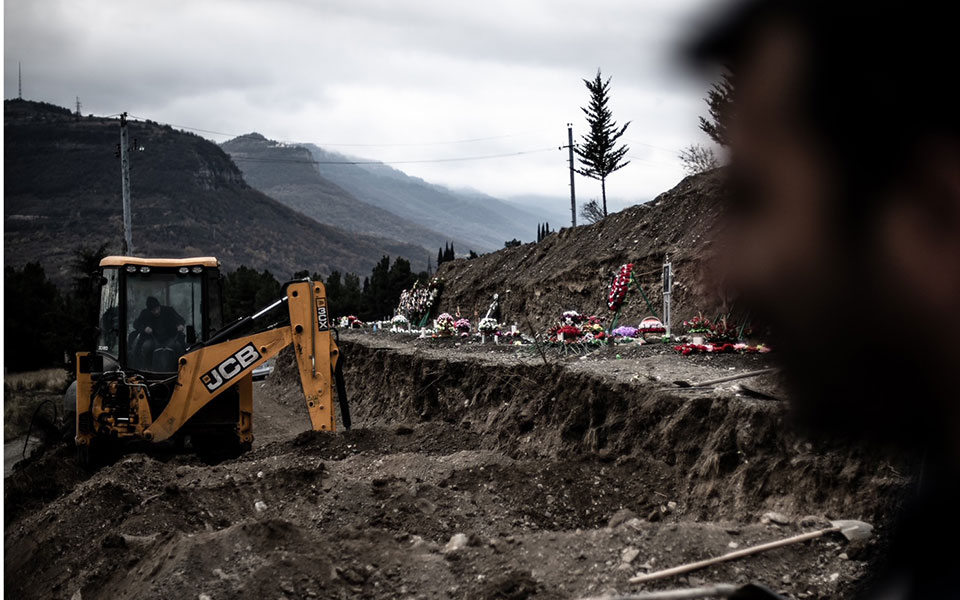 Nevertheless, OSCE Minsk Group Co-Chairs (USA, Russia and France) – internationally mandated format for negotiating a peaceful settlement of the Nagorno-Karabakh conflict, do affirm that an enduring solution still needs to be negotiated, and the status of Nagorno-Karabakh should be determined as well. Ilham Aliyev cares not. In fact, Aliyev has in the immediate aftermath of the war, during a “victory parade” in Baku referred to Armenia’s capital Yerevan, Lake Sevan and Syunik as “historical lands of Azerbaijan”. Hence, Azerbaijan’s soldiers have the audacity to continuously provoke the Armenians, penetrate and even occupy some areas of the sovereign territory of Armenia. The Aliyev’s continuous statements about “Zangezur corridor” (the Syunik region of Armenia bordering with Iran) is aimed, as Aliyev himself confessed, realizing the Panturanistic dream of unifying all Turkic peoples. The November 14th and 16th attacks by Azerbaijan on the south eastern territories of Armenia with the use of artillery and heavy equipment, and the violation of Armenia’s territorial integrity should be understood from this focal point. The rhetorics and actions of Azerbaijan are an existential threat to Armenia’s sovereignty and no less threat, a Panturanistic one, to the entire region, from Europe to China, from Russia to Iran.
It is clear that resumption of negotiations is the only route to finding an enduring solution to this long-lasting conflict. It is also clear that the freedom-loving Armenians of Artsakh cannot live under the sovereignty of authoritarian Azerbaijan. Death or complete de-Armenianization of Artsakh would be the result, something that we can not think of and should do everything possible to prevent from happening while it is not too late. If responsibility to protect has any meaning, then each country individually and the international community collectively should stand up and clearly show Azerbaijanis that this behavior will not be tolerated. Targeted appeals and concrete actions are more than ever vital now. Acting equivocally would mean silently accepting the ethnic cleansing of Artsakh by Aliyev.
Tigran Mkrtchyan, Designate Ambassador Extraordinary and Plenipotentiary of the Republic of Armenia to the Hellenic Republic