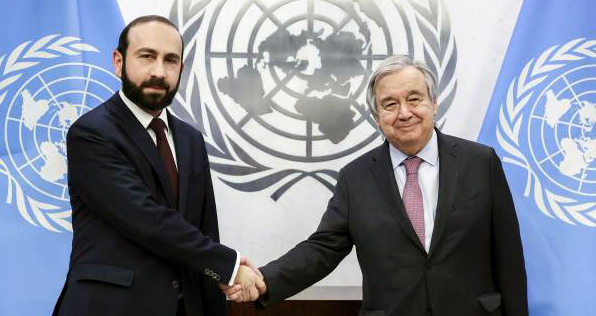 Minister Mirzoyan briefed the UN chief on the latest regional developments, particularly the blockade of the Lachin Corridor by Azerbaijan since December 12, the disruptions of gas supply to Nagorno Karabakh and the serious humanitarian challenges as a result. The necessary for an addressed reaction by the international community to the current situation was emphasized.

The Armenian side has also touched upon the ongoing occupation by Azerbaijan of Armenia’s sovereign territories, the normalization of the Armenia-Azerbaijan relations and the settlement of the Nagorno Karabakh conflict.

Ararat Mirzoyan said Azerbaijan continues its policy of use of force or threat of force, militaristic rhetoric and Armenophobia and maximalist approaches, thus distorting the stability and security in South Caucasus. At the same time, the FM reaffirmed Armenia’s commitment aimed at establishing stability and peace in the region.

The ambassador of Armenia in Greece Mr. Tigran Mkrtchyan’s interview to TV100 Thessaloniki