The First Ambassador of Greece to Armenia, former Secretary General of the ISTC, Leonidas Chrysantopoulos, made a statement on Azerbaijani threats against Armenian cultural heritage in Artsakh (Nagorno-Karabakh). 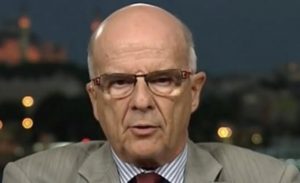 “The creation of a working group by Azerbaijan to destroy the Armenian presence in Armenian churches in the occupied territories of Artsakh as a result of the last war by Baku is cultural fascism,” said the highly experienced diplomat.

“Under the pretext of Christian churches belonging to Caucasian Albanians, this group must decide that the Armenian presence should be eliminated from the churches, he continued.

“The Albanian Church of the Caucasus was an autonomous church,” Chrysantopoulos, said, adding: “It was created briefly in the fifth century and subordinated to the Armenian Apostolic Church in 705.”

“The Albanian alphabet was created by Mesrop Mashtots, who created it in 405 and at the same time created Albanian. Therefore, it is impossible for the Armenian Church itself to use the Albanian churches,” he explained.

“Baku’s aim is to commit cultural genocide, and for that it must be condemned,” concluded the former Secretary-General of the The Black Sea Economic Cooperation (OSEP).

According to Hyper Allergic, Azerbaijan on February 3 announced the creation of a state body for purging politically-undesirable monuments in Artsakh.

“A working group of specialists in [Caucasian] Albanian history and architecture has been set up to remove the fictitious traces written by Armenians,” said Azerbaijan’s minister of culture Anar Karimov.

The reference to Caucasian Albanian history is a popular state-sponsored conspiracy theory that reimagines indigenous Armenian monuments as appropriated from an extinct civilization.

“I can’t find any justification for or logic in the creation of the new state organ to remove Armenian inscriptions,” Baku-based Azerbaijani researcher Cavid Aga, whose work focuses on the Caucasian Albanian language, told Hyperallergic in an interview.

“It doesn’t serve Azerbaijan’s international standing; it doesn’t serve multiculturalism policy; it won’t serve the future. There is simply no reason to do this,” he added.

READ MORE: Antalya Diplomacy Forum: Turkey wants the participation of Greece and Cyprus in its “Davos.”

Meanwhile, Leonidas Chrysanthopoulos is a member of the Hellenic Institute of Cultural Diplomacy.

He was the first Greek Ambassador to Yerevan, Ambassador to Poland, to Canada, and from 2006-2012 was Secretary-General of the Black Sea Economic Cooperation Organization based in Istanbul.

He is the author of “Caucasus Chronicles-Nation Building and Diplomacy in Armenia 1993-1994” and “The 1974 Invasion of Cyprus as presented mainly by the radio and television of Canada and the USA.”

He has published many articles in the national and international revues and press.

Recently an article written by him and entitled: “The contribution of Multilateral Cultural Diplomacy in the development of humanity and the important role of Greece”, was published in Issues of Greek Cultural Diplomacy of the Foundation of International Legal Studies.