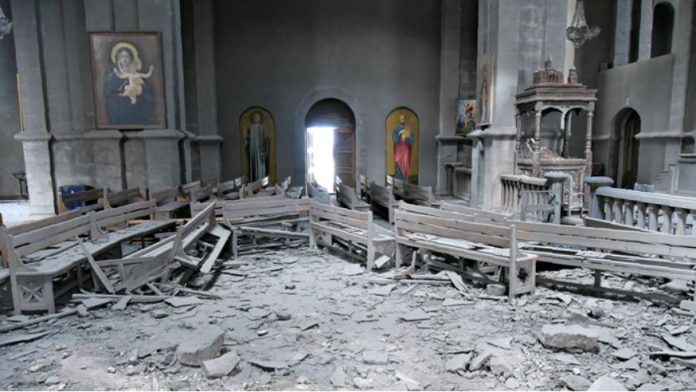 The Armenia-Greece Friendship Association (AGFA) has condemned in a statement the initiative of the Azerbaijani government to establish a working group to eliminate the Armenian presence from Armenian churches, the Armenian Embassy in Greece presented the statement on its Facebook page.

“The Armenia-Greece Friendship Association condemns the initiative of the Azerbaijani government to set up a working group to destroy the Armenian presence from the Armenian temples in the territories occupied by Azerbaijan under the pretext that those temples belonged to the Caucasian Albanian Church,” reads the statement.

According to them, the reality is that the Albanian Church in the Caucasus was an autonomous church, established for a short time in the 5th century, and in 705 it was subordinated to the Armenian Apostolic Church. The Albanian alphabet was created by Mesrop Mashtots in 405. “Therefore, it is almost impossible for the Armenian Church to use Albanian temples. It is obvious that Baku’s goal is to commit another cultural genocide through the action of cultural fascism,” the statement reads.

The Armenia-Greece Friendship Association condemned the act and called on the UNESCO and other international organizations to take a stand and do everything possible to prevent it.